RESISTANCE to the tyranny of 'isms' and Jacquie's sense of the dramatic encouraged her to experiment with different styles of painting, always hovering between representation and abstraction. Deeper affinities nonetheless emerged with that most flexible of styles, the Baroque, in terms of both form and theme.

SHE, LIKE BAROQUE ARTISTS, wished to explore the energies and emotions communicated by the movements, gestures, hands of the human figure - whether momentarily in repose, caught up in rhythmic work, exulting in dance, or driven by passion in archetypal dramas. She, as they, saw in light and colours means to convey and celebrate the forces at work in life, and Jacquie was above all a colourist and painter of light.

ACCORDINGLY, at various times she paid homage to the Italian Baroque painters of biblical and mythological dramas, which she sought to reinterpret in less figurative terms. But she also inherited a very French taste for clear, elegant construction, and her deepest affinity was no doubt with the French Baroque which she admired so much in the painting of Georges de La Tour, the music of Couperin and seventeenth-century tapestries. I think it was this that made her often balance sweeping baroque movements with squarely solid structures, and her swirls of line and colour with crisp, orderly composition.

THE HUMAN FIGURE mostly supplied the basis of Jacquie's work, usually linked sympathetically with others and deeply immersed in the light, colours, shapes and textures of the physical world. Bathers, dancers and workers stretch their bodies in groups and friezes to celebrate the thrill of their own vitality and the light, scrolls and volutes of a world in which they seem engulfed. The Three Graces join them from mythology, not so much for the sake of allegory, as for the community of their complementary forms and the sympathy which they represent, as well as for their closeness to a nature which sweeps them up into its colours, waves and eddies. We are close to classical metamorphoses here, and one day Daphne might have joined Jacquie's powerful Circe and Arachne, myths frequently portrayed in Baroque art.

THIS IMMERSION of Jacquie's figures into a profusion of light and colours, full of formal counterpoints to the rhythms of their shapes and movements, tends to become a celebration of the musical interplay of sensory energies for their own sake. A celebration which knows that it is only an illusory performance, as she always underlined by leaving the edges of her canvases bare. No wonder that she loved Dufy, Staël and the artists of postwar Paris.

IF THE SUMPTIOUS PROFUSION of the Baroque appealed, so did its passionate painted dramas, and these Jacquie also reworked as almost abstract, suggestive spectacles of conflicting colours and rhythms, in which the faces of Tobias, Hagar's Angel and Susannah all but disappear and their vulnerable hands alone signal their consternation, delight, fear or despair.

IT IS NO SURPRISE that someone so inspired by the sumptuousness of the Baroque and the intensity of emotions it pictured should have been moved by Mexican art. The exuberance and colours of Mexican churches naturally attracted her, but Jacquie also reacted strongly to the encounter in Mexican culture of a longstanding preoccupation with death and the emphasis on suffering in Spanish Baroque. For her, the figures crushed at the bottom of Mexican pyramids under the weight of centuries of repression and cultural disasters, from Christianity to cocacolonization, seemed (whatever their ostensible function) symbols of the unquiet dead of Mexican history. Jacquie had hoped to return to Mexico, to which the love of life in her art responded so strongly. 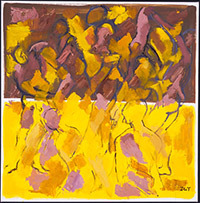